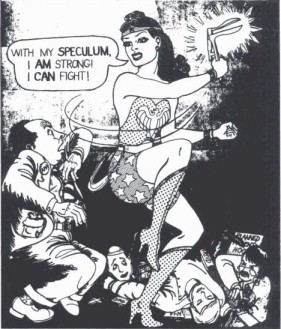 Artwork by C Clement. Appeared in July 1973 issue of Sister: the newspaper of the Los Angeles Women’s Centre.

I know I haven’t been writing much recently, but even I wasn’t expecting the complete absence of posts here during April. Unfortunately though, April turned out to be one of those months where life just takes over. Where no matter what you have planned, something comes along that throws you completely off course.

Some of you may remember the problems I had a few years ago that resulted in my having a hysterectomy: an operation incidentally, that failed to fulfil its promise of improving my housewifey skills. Well I’m calling this latest episode Fred and Barney’s revenge, only this time the mystery lump wasn’t in my uterus – well it wouldn’t be really would it, being as I don’t have one! – it was in my right breast.

I discovered it purely by chance one evening while I was soaking in the bath. I wasn’t even doing a breast exam at the time, because to be honest I’d become a bit complacent about doing them since I got the all clear from the family history breast clinic last year.

I’d had a mammogram then which had shown that everything was fine, and so I suppose I’d crossed breast cancer off the list of potential future problems I might have to deal with. And I’d got complacent, and I’d stopped checking.

And then I found the lump.

Anyway, to cut a long story short I went to my GP, who told me not to think the worse but referred me to the breast clinic straight away and, as per the protocols that are (hopefully) still in place despite the Government’s best efforts to destroy the NHS, I got an appointment through to see a consultant within a fortnight. That’s right, from finding the lump to seeing the GP to having it checked out thoroughly by specialists took two weeks, start to finish.

A lot of breast clinics now are what are known as one stop clinics, and the one at the Norfolk and Norwich is no different. So in the course of 3-4 hours I had a physical exam, another mammogram, an ultrasound scan, and a core-needle biopsy. At the end of all that I was called back in for a chat with the consultant who’d performed the physical exam to be told that, despite not having the biopsy results yet, they were all confident there was nothing to worry about and the lump was almost certainly benign.

The problem is I then had to wait for the biopsy results, and they took another two weeks to come through.

I know I’m naturally a pessimist, so maybe I’m in the minority in this, but it doesn’t matter how reassuring people are with me, no matter how assured and confident they are, until I’ve got the results in my hands I just don’t believe them. So even during those two weeks I couldn’t relax.

Thankfully though, the results when they eventually arrived confirmed what the consultant had told me, and the bastard mystery lump is indeed entirely benign. Phew!

So what I suppose I’m trying to say is that I didn’t write anything in April because I basically spent the entire month worrying. For nothing as it turns out. I did learn a couple of things during all this though: