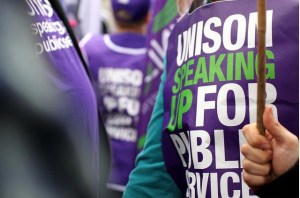 Remember March 26th last year when we did this? – Anti-cuts march: Anger amid the carnival

Well, it’s nearly time to do it all over again.

This year’s march and rally – A Future That Works – will be on October 20th, with demonstrators setting off from the Embankment sometime around 11am, and ending up in Hyde Park several hours later.

The march for A Future That Works is happening for pretty much the same reasons as last time, but with a few more thrown in for good measure. It’s been over a year since the last demo don’t forget, and I don’t think back then even the most hardened and cynical among us could have predicted the extent of the devastation this government would have wreaked on the country in such a short space of time. In a nutshell, austerity isn’t working, and it’s about time our esteemed leaders woke up to that fact. Mind you, this Government isn’t working either, but sadly I think we’re stuck with them a while yet.

Anyway, I see Jon managed to beat me to this by blogging about it a couple of days ago, but he doesn’t have a great big ugly clock thingy in his sidebar counting down the months and days to the big event, so I think I get to win the Internet or something for that…..