This was the week when, much to the collective faux outrage of the tabloids, the young woman who was tasked with the job of introducing Gordon Brown at the launch of Labour’s manifesto, was discovered to have written something once on the Internet that wasn’t entirely supportive of him. “How very dare she!” frothed the hacks (and the right-wing bloggers), as they all worked furiously to try and spin a story out of sweet FA. “Quick everyone, to her Facebook page, let’s see what else we can turn up!”

Here’s the Mail’s first take on the non-story:

The Stillettoed Socialist: Brown introduced by glamorous Labour activist…who didn’t even want him to be PM

“The glamorous activist who introduced Labour’s manifesto has previously called for the violent death of Margaret Thatcher and for Gordon Brown to be removed as Prime Minister.”

And here’s their second shot at it, again by Kirsty Walker, but 12 hours later and with that spelling error sorted out :

The glamorous “Stilettoed Socialist” who said: Gordon Brown must go

“A glamorous young activist who introduced Mr Brown to the crowd at Labour’s manifesto launch in Birmingham has previously called for him to be removed as Prime Minister, and for the violent death of Baroness Thatcher.”

And here’s the Sun:

Brown, get your coat

“THE glamorous blogger who gave a gushing introduction to Labour’s manifesto launch once called on Gordon Brown to QUIT, it emerged last night.”

And their front page link to the story…

Of course it wasn’t just the Mail and the Sun that covered this one: in fact once everyone realised that both Ian Dale and Guido Fawkes had posted about it, the story of @BevaniteEllie’s previous disaffection with Brown was all over the meeja, including in both the Times and the Guardian.

and the Telegraph again:

and the Telegraph again:

But it’s sexism we’re here to talk about, and while obsessing about the behaviour of a “pretty” “glamorous” young woman, and trying to squeeze every last ounce out of a non-story purely on the basis that the person concerned is young, female and attractive is obviously one form of it, for unadulterated, full-blown, not-even-trying-to pretend-it’s-anything-else sexism, in all its misogynist glory, have a read of the comment thread at Guido Fawkes’ Blog:

Ellie didn’t always talk out of her arse

Or alternatively, if like me you can already predict the kind of sexist shite* you’re going to find over there, don’t bother.

Anyway, away from Ellie Gellard, the bizarre fetishising over the state of the “first wives’” feet continued apace. Here’s Jan Moir:

“With its funereal connotations, it is more associated with rock stars than politician’s wives.

But joining her husband yesterday, Samantha Cameron wore black nail polish on her toes – just visible through her high-heeled wedges – perhaps proving that little has changed since her teenage goth phase…..

….While Mrs Cameron’s wedges showed her well-manicured feet to perfection, the same could not be said for that state of Sarah Brown’s toes – which she was unable to hide from the cameras while on a visit to a Hindu temple on Sunday.”

The Guardian, meanwhile, has found some “great summer sandals” for Sarah Brown “with friendly coverage” 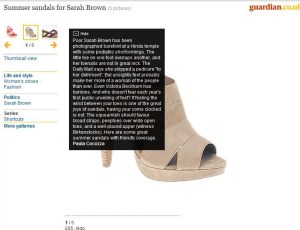 And finally back to the Telegraph, which reckons that Cameron’s manifesto launch yesterday was all about trying to appeal to women voters:

According to Robert Winnett, Deputy Political Editor, it wasn’t just the allegedly family friendly policies in the Tory manifesto that were geared towards female voters, but the whole manifesto launch itself. According to Winnett, this was evidenced in particular by the fact that “The Conservative leader was surrounded by women at the event.”

Which is strange, because in the picture they’ve used to illustrate that statement I can only see three women: I can however see lots and lots of men in grey suits…. 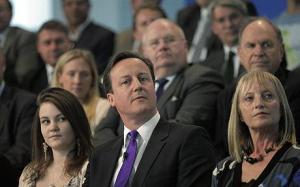 Oh yes, and for added Telegraph joy, if you hover your mouse over that pic you’ll see it’s been tagged with “ladies-man”. And just for the record, it wasn’t me wot done it, it was them.

*If you see any glaring examples of sexist shite during the  General Election campaign that you think I may have missed,  feel free to email them to me at cathryne_1999 at hotmail.co.uk