I was sort of hoping I’d set myself a difficult task in looking for evidence of sexist shite* in this election campaign: what with it being 2010 and all. But it turns out I couldn’t have been more wrong. It’s everywhere.

Have Cameron’s cuties really got what it takes to transform politics?

“As a study of female ambition it’s worthy of a Vanity Fair picture spread: the Tories proudly parading their latest clutch of female candidates in a glossy photoshoot.

These are Dave’s Dolls, the real women he’s promoted and, in some cases, selected, to fight and win safe Conservative seats in the General Election. And what a fascinating bunch they are. No twin sets and pearls here.

Some blue blood, but not a blue rinse in sight, they are his new fighting force; the secret weapon with which he believes he will win the war.”

Cameron’s cuties, Dave’s dolls: Amanda Platell is  Shakespeare and I claim my 5 groats!

Jan Moir, writing in the same paper, reckons that the (mythical, entirely invented by journos) “war of the wives” is starting to hot up:

War of the wives: Saintly but sinister Sarah vs outspoken Miriam

“The 42-year-old brainbox is head of international trade practice for the multinational law firm DLA Piper.

So she hasn’t got time to tuck Cleggy’s shirt into his underpants or stop him walking into cupboards as he kisses babies and chats to pensioners at a meet and greet in Scunthorpe.

And her refusal to trail behind her husband on his electoral, glad-handing tour of the country is winning her a sudden flash mob of admirers. So you go, Miriam! Or rather, don’t go. That is why they all like you so much.

Mrs Clegg’s very absence on the campaign trail has made the nation’s heart beat if not faster, then at least a little fonder. ‘No appendage’ is the powerful message. Is this something that eager beavers Sarah Brown and Samantha Cameron should be noting?

Asked last month if she were willing to be a political ‘secret weapon’ in the manner of SamCam and Sarah, Mrs Clegg sniffed: ‘Well, listen, I don’t have the luxury of having a job that I can simply abandon for five weeks, and I imagine that that is the situation for most people in the country.’

Ooh, handbags! Smythson handbags, at that.”

Ooh, just fuck off Jan why don’t you.

Here’s what Moir has to say about Sarah Brown:

“Out on the hustings, Mummy Sarah fusses around Gordon, pushing him on to trains, making sure he eats his greens, trying to be a walking sandwich board that advertises his human side – or (unwittingly) the fact he doesn’t seem to have one.

She tweets, she has her own YouTube channel, yet she is careful, always, to say nothing of note”

Yeah, and the words pot and kettle spring to mind….

Over in the Express meanwhile, the (mythical, entirely invented by journos) “war of the wives” is all about the clothes:

“THEIR husbands may be hitting the general election 2010 campaign trail in earnest but Sarah Brown and Samantha Cameron will be fighting their very own sartorial battle.

Gordon Brown and David Cameron’s other halves will be standing firmly by their men in the countdown to the general election next month – hoping to sway votes through their fashion choices.”

While Glen Oglaza at Sky News thinks it’s all about how attractive “the wives” are. Or rather he doesn’t, “a viewer” does: nudge nudge wink wink say no more….

“I’ve always known which party to vote for in the past, but this year I have no idea what to do.

Sarah Brown seems very nice, committed to her husband, and does a lot for charity. But then I saw Samanatha’s interview and see that today she is on WebCam being really normal in a glamorous I’m-on-camera kind of way. I thought she seemmed very appealing, positively fragrant, and well worth voting for.

“On the other hand, that Miriam Clegg seems very foxy in a sassy Spanish way that I find very appealing.

So I have no idea who to vote for. Think I might go Lib Dem this time, but I need to check out the Ukip leader’s wife.”

And speaking of attractiveness, here’s the Sun:

The Dave and Sam Cam Show

Mr Cameron praised pregnant Sam, 38, in a fly-on-the-wall clip filmed at the couple’s home on Friday and posted on YouTube.”

“Pretty?” Is that the best they can come up with? Perhaps they need to take some tips from the Telegraph, who aren’t pulling any punches with their headline:

Bryony Gordon, also in the Telegraph, has a different, and dare I say it, ever so slightly creepy take on things:

Introducing Wife Watch: Today, I want to be SamCam’s cleaner

“Judith Woods has written a brilliant piece in praise of Sam Cam. I couldn’t agree more with it – recently, I have found myself daydreaming about what it would be like to be Sam Cam’s best friend, or her younger sister, or maybe just her cleaner or something.

I have these fantasies about Sarah Brown, too. I think I have become quite obsessed with her.“

Hello, on the other hand, is sticking strictly to the wives-supporting-their-men meme. For now.

And finally, last but by no means least, proof, if any were needed, that a picture can paint a thousand words… 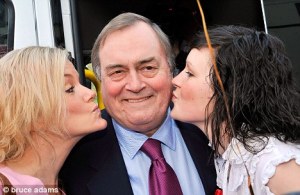 *If you see any glaring examples of sexist shite during the  General Election campaign that you think I may have missed,  feel free to email them to me at cathryne_1999 at hotmail.co.uk