Counting the cars on the New Jersey Turnpike

That’s what I was doing last week, and yes, I do mean that literally:

That’s the big screen in the New Jersey Traffic Management Center for instance, which is used to monitor all the major roads in the area.

And here’s a view from the Turnpike itself: 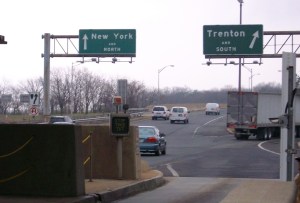 I was in the States for a week, and I have to say, it really was the trip of a lifetime for me. I was over there for the WILD (Women in Leadership Development) Conference, which is organised every year by the New Jersey State AFL-CIO (American Federation of Labor – Congress of Industrial Organisations, {the US equivalent of the TUC}). But the conference only ran from Friday afternoon to Saturday afternoon, and as I was there for a week I had plenty of time to fit in some other things.

So, I spent a day in the New Jersey State House at  an Assembly Appropriations Committee meeting, where I listened to various public sector trade union reps testifying against proposed changes to public employees’ pensions and benefits. A full recording of the proceedings is available here, but the highlight for me was Bill Lavin, President of the Firefighters Mutual Benevolent Association’s speech, which you can listen to here: Bill Lavin Testimony

What I found bizarre was the chair of the committee’s reaction to the applause which followed Lavin’s speech. In fact if you listen through to the end of the clip, you can hear the chair, Assemblywoman Nellie Pou, having a right old rant about the audience’s spontaneous decision to clap Levin. And that was my first introduction to how politics is done a bit differently over the water….

The “new king in town” who Levin alludes to in his speech is the new Republican State Governor Chris Christie, who threw down the gauntlet in his budget address a few weeks ago. In his address Christie launched a blistering attack on the New Jersey teachers’ unions, and he hasn’t let up since, making clear his plans to punish public sector employees for the state of New Jersey’s finances, and making even clearer his contempt for trade unions and the concept of collective bargaining.

Click here for a video of Christie’s attack on teachers.

The WILD Conference came after the Appropriations Committee meeting, which was great because the Democrat Speaker of the Assembly, Assemblywoman Sheila Oliver, was a guest speaker at WILD. Here’s what she had to say about it all: Sheila Oliver speech

Again, that clip’s well worth listening to, especially for the bit at the end where Oliver vows to bring to a halt all legislative business in the Assembly unless certain amendments to the pensions bills go through. It’s a pledge that left many of the US trade unionists in the room open mouthed with astonishment, and it’ll be really interesting to see if she manages to deliver on it.

Of course my week wasn’t entirely taken up with politics: I did some touristy things too. I also visited a Rape Crisis Centre; had a tour behind the scenes of the Turnpike; attended a members’ meeting of the New Jersey Turnpike Employees Union – IFPTE Local 194; and of course, paid a trip to New York, where I fell in love with skyscrapers and got a bit arty farty with my photography:

But I’ll post some more on all that later in the week.