I was struck by Micky D’s comment on here a few weeks ago where he explained how he’d always thought of Norwich as “some quiet backwater.” Because it’s really not you know: like any major city, it has its fair share of problems.

This for instance is Prince of Wales Road, a road I regularly have to walk down as it leads from my bus stop to the train station: 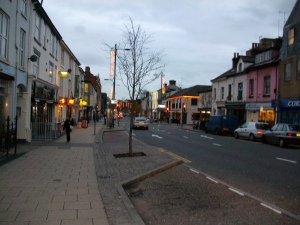 Yeah okay, I know what you’re thinking: “What in earth is she going on about, it looks dead quiet there. Cath’s obviously lived out in the sticks too long if she thinks there’s anything wrong with that street!”

Just bear with me.

I took that photo during the daytime. At night, Prince of Wales Road is an entirely different beast: and not a very nice one at that. In fact it’s a road that I, along with many other women I know, refuse to walk along after dark. And as it’s the only route back to my bus stop from the train station, and as I take trains a lot, it’s the main reason I end up forking out so much for taxis all the sodding time.

According to this report (starts at 2 mins 15 seconds in) up to 19,000 people can be found on Prince of Wales Road on a Saturday night, and I’d estimate that the numbers aren’t that much smaller on a Thursday or a Friday night either. This year alone 2 men have died following violent altercations outside the road’s nightclubs, and numerous other people have been assaulted.

Now you’d think that with all the trouble and violence Prince of Wales Road attracts, the Norwich authorities would be trying to find ways to make the place safer wouldn’t you?

Safety doesn’t even come into it when money’s concerned. Especially women’s safety.

Earlier this year, Steve Peri of the Peri Leisure business empire which owns Mercy Nightclub on Prince of Wales Road (the biggest nightclub in East Anglia), submitted a planning application to convert the old games arcade opposite his club into a bar. Now someone who was on the ball (not me I’m ashamed to say) spotted this, and submitted a complaint about the adult nature of the proposed establishment to the council. So on the 14th May the City Council’s Planning Applications Committee met to discuss Peri’s change of use application, and this is what was said:

“An objection was raised on the ground of the nature of the use of the bar. Some confusion arose from the licensing application which contains a section for adult entertainment/lap dancing venue. The applicant, as with other premises under his ownership, has sought a full license. This includes the provision of adult entertainment. The applicant has confirmed verbally that there is no expectation at present that this will be implemented. In any case, a lap dancing venue would be a Sui Generis use and as such a further application for change of use would be required, unless it is ancillary to the main use as a bar/nightclub. The applicant has also confirmed that the same license applies to other premises under his ownership but again, this part of the licence has not been implemented.”

Sounds fair enough doesn’t it? The complainant and members of the committee just got themselves a bit confused over Peri’s application for a full license. But ultimately Peri was able to reassure everyone that his application for a full license was pretty meaningless and not likely to lead to anything, by pointing out that his other premises were also fully licensed and they’d never been used for lap dancing or any other so-called adult entertainment activities…..

And so the license was granted. 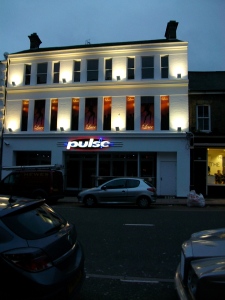 And here’s the upstairs bar: Lace 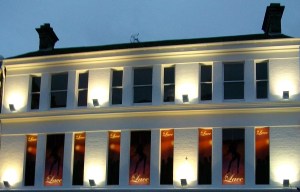 Ermm, hang on. What’s that on the windows?

Yep. Steve Peri has done exactly what he implied to the council he wouldn’t be doing, and has opened Norwich’s third lap-dancing club. Sorry, I mean “Gentleman’s Club” obviously.

Toby Middleton, Peri Leisure’s operations manager claims that: “A gentleman’s club is a form of entertainment and we have not done it for seedy old men to come to, but to boost the night-time economy.”

To reassure us on that score Middleton goes on to explain: “There will be three girls on stage at all times, unisex toilets, the biggest champagne bar in the city, and a dress code.”

Oooh, a dress code. That’ll keep the creeps and the misogynist bastards out then….

He also claims: “We have not done something that is going to be detrimental to people’s quality of life.”

Really? Well try telling that to the women of Norwich Mr Middleton. Women who already feel unsafe on Prince of Wales Road, and who will now have to walk past your sleazy establishment and be reminded of exactly what you and Steve Peri think of women every time they glance up at those atrocious fucking windows.

Still, at least the local citizen’s forum has come out in opposition to the club, and to the increased sexualisation of women and girls.

Arghh, who am I trying to kid?

He said: “I don’t think Norwich needs a limit put on the number of bars it has in the city centre.

“Prince of Wales Road is the designated entertainment centre of the city and always has been, and a variety of venues attracts different clientele and is healthy competition.

“We have long experience of the way Steve works and runs his venues, and I welcome this initiative.”

I think it might be time to set up something like a Norwich Feminist Network, or a Norwich Object group….