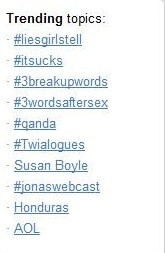 Anyone taking a glance through the trending topics on Twitter today could be forgiven for thinking that maybe the Daily Mail is actually right for once, maybe Twitter and other social networking sites really do rot your brain.

Don’t get me wrong, I’m actually an avid fan of Twitter, and most of the time I really enjoy using it. I’ve found it a great tool for keeping up with other bloggers and writers;  it’s enabled me to make links with some fantastic feminists and women’s organisations, and in the past six months or so that I’ve been tweeting I’ve relished the opportunity it’s given me to take part in some truly epic Internet wins.

However, I can’t be the only one who’s been on Twitter in the last couple of days and wondered why the fuck they even bothered. Who’s logged on to see what everyone’s been up to, but who’s been struck instead by the dawning realisation that yet another online platform is in the process of being hijacked by misogynists.

Wondering what on earth the humourless femnazi has got her big Marks and Sparks knickers in a twist about this time? I’m referring specifically to the “jokes” being tweeted using the hashtags #liesgirlstell and #3wordsaftersex.

Some examples – and hands up if you think these are funny:

A note to my fellow twitterers, or tweeters, or whatever the hell the current terminology is now: whether it’s on Twitter, Facebook, Myspace or out in the real world (irl for for the benefit of those who haven’t yet moved beyond textspeak [or even txtspk]) RAPE JOKES AREN’T FUNNY! And neither is misogyny. Mkthxbai.

But if you want funny – here’s UKIP’s desperate attempt to get in on the act: 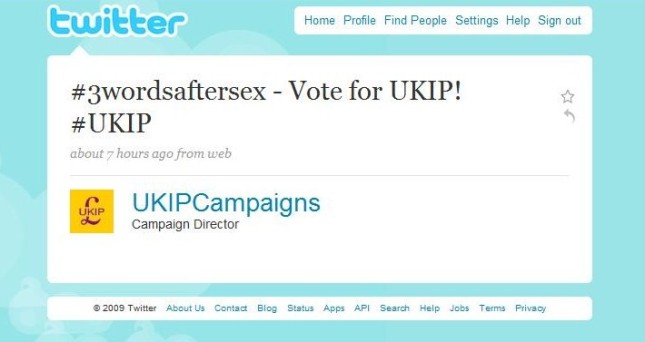