When I read Heather Harvey’s article on CiF yesterday about Amnesty’s latest attempt to raise awareness about sexual violence being used as a weapon of war, I really wanted to be able to endorse the campaign.

But then I clicked on the link to the Rape is Cheaper than Bullets ad that’s going to be appearing across the London underground network over the next few weeks.

And I’m sorry, while I fully support the work that Amnesty does, in this instance I have to say, this ad is a massive fail. 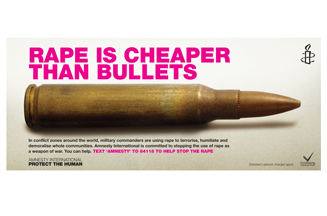 What exactly is the message here?

Cara over at the Curvature says that her first question on seeing the ad was, and still is:

“so what, we should make bullets cheaper?”

She goes on to say:

“It makes me sad, because I’m usually a fan of Amnesty International, and I’m glad that they’re attempting to bring attention to this issue.  I just wish that they were doing it in a way that, well, made a bit more sense.”

It shouldn’t need CiF articles and Amnesty press releases to explain to people what this is all about, but I’ll be honest here, if I hadn’t read up on it I wouldn’t have the faintest idea what this ad campaign was trying to say.

Depressingly, I suspect the same is true for a lot of people, many of whom won’t even bother trying to find out.

And that’s what worries me.

I did a google search to see if this was being discussed anywhere else on the net: the results confirmed my worst fears.

These are from a body-building forum (and no, I’m not linking to it, but it’s not hard to find):

“Pic of a sign i saw on the London underground, I think it makes a valid point of advertising raping someone over shooting them, next time i have those two options, I’ll know which way to go in order to save money.”

“its not actually cheaper… A bullet is about what, 30 cents? Chasing someone down a back alley, raping them then running away takes ~20 minutes. Even for minimum wage of $6/hour that’s $2 worth of lost earnings when simply shooting them is only 40 cents (1 minute to shoot and run away + 30 cents for bullet)”

“oh yah if you want to add in some other costs. cost of gun? time to go buy bullets? time to put gas in car to go buy bullets? cost of car to go to ammo store? if you walk to store that takes time, value of time. not to mention you can’t put a price on the satisfaction of raping someone (if your in to that) rape is way cheaper.”

“But officer, the sign on the subway owned by the government told me to do it.”

“Not to brag, but I can afford to rape AND shoot…”

Meanwhile over at CommonDreams.Org some men are having a discussion as to which is worse, rape or death:

“Are you insane? Rape is absolutely horrible. But I’d take rape over death.”

“I just thought of a great new ad campaign.

‘Have you been raped?
Kill yourself!
It’s better than living.'”

Al Fox’s comment on Brand Republic sums it up for me:

“Lots of unstable, dangerous individuals travel on the tube – and lots of women alone. Seems to me that this ad will put rape in the minds of said unstable individuals – who are looking across the tube at lone women. That’s what advertising does. And not everyone thinks in the “right way”. Has anyone stopped to think this one through?”

Heather Harvey says that the ad is “meant to be provocative,” which it is, but not necessarily in the way Amnesty intended. She also says:

“if it’s offensive then that is nothing compared to what hundreds of thousands of women and girls are suffering in conflict zones around the world.”

I have to ask, what about the offence to the thousands of other women and girls who have suffered rape and sexual assault and who are likely to be triggered by these ads? Or who have to sit on the tube and listen as dickheads like the ones on the body-building forum weigh up the pros and cons of raping or shooting someone.

As I’ve said, Amnesty does great work, and I fully support their aim to bring rape as a weapon of war to public attention.

This is the image Amnesty are going to be using in newspapers as part of the same campaign: